Recreating Egypt in Morocco’s Atlas Mountains. Images by Steve Hare.
While aspiring Thespians dream of Oscars and the big time, extras are ecstatic to mingle with the stars amid the razzle dazzle of movie making.

Over the years, Morocco has served up a feast of opportunities for local people to be transported into a fantasy world and relish their fifteen minutes of fame.

Our Time for Life Correspondent, Sharon Cain, has visited magnificent filming locations in Morocco, including the world’s biggest film studio which has produced world-renowned blockbusters.


Hundreds of Hollywood films have been filmed in Morocco
Set against the Atlas Mountains and spanning 31,000-square-metres, the Atlas Film Studios near the city of Ouarzazate dominate the landscape.

Founded almost four decades ago in 1983 by entrepreneur Mohamed Belghmi, the venture has gone from strength to strength due to Morocco’s dramatic buildings, conducive climate, and low production costs.

The industry has boosted the country’s economy over the past seven decades. Earliest movies include Ali Baba and the Forty Thieves (1954) and Laurence of Arabia (1965).

Locations span Casablanca where the iconic film with Humphrey Bogart and Ingrid Bergman was produced in 1942 - and Essaouira where scenes from Othello, directed by Orson Welles, were shot in 1951.


Scenes from Gladiator include the market square
Star studded epics made at Atlas Film Studios span Ben Hur, The Last Temptation of Christ, and The Mummy. They also include Gladiator, an epic historical drama directed by Ridley Scott.

Key scenes filmed at Atlas include the market square and the holding area where the slaves were kept before entering the arena.

Our tour guide was beside himself with excitement as he described the buzz and thrill of being an extra in movies including Gladiator which scooped no less than five Oscars. His passion was contagious as he brought the tour alive with entertaining anecdotes.


A Tibetan backdrop recreated at Atlas
Our tour included the set of Kundun, a biographical film made in 1997 directed by Martin Scorsese who is renowned for pushing film-making boundaries.

Scorsese’s string of successes includes Goodfellas, Taxi Driver, Raging Bull, Casino, and The Last Temptation of Christ,’ which he also filmed in Morocco in the late eighties.

Kundun is based on the incredible life of the current Dalai Lama. At just two-and-a-half-years-old in 1937, he was hailed as the 14th reincarnation of the Buddha of Compassion, becoming his people’s next spiritual and political leader.

The name of the film means ‘the presence’, the title used to address the Dalai Lama. The film follows the Dalai Lama’s life from childhood through to the Chinese invasion of Tibet and his journey into exile in India where he is still.


Realistic Creation: Kundun is based on the Dalai Lama’s life
Scorsese brought across a 200-strong cast of actors and film crew to the Atlas Film Studios. Shooting took place across three months with just five minutes of action making the final cut.

Kundun was released just months after ‘Seven Years in Tibet’ based on the true story of an Austrian mountain climber who became friends with the Dalai Lama during the time of China's violent takeover of Tibet. 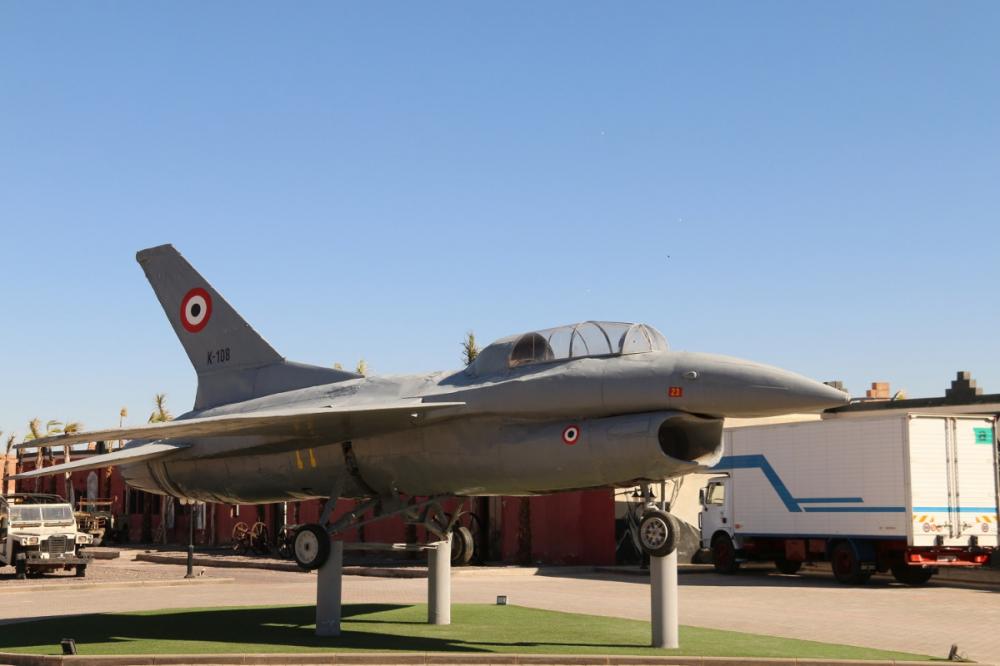 The F-16 fighter jet enabled the glamorous duo to escape into a fictional African desert in the action-packed adventure to find the legendary Jewel of the Nile.


The ksar (fort) is among Morocco’s impressive monuments
Our Moroccan explorations took us to the ancient and fortified town of Ksar Ait Ben Haddou in the Atlas Mountains between the Sahara and Marrakesh.

Originating from the Berbers and hailed as a notable example of Moroccan earthen clay architecture, the Ksar Ait Ben Haddou fort is a UNESCO World Heritage Site.

Sitting on a former camel caravan route between the Sahara and Marrakech. It has risen to prominence for its exotic backdrops which have featured in a myriad of famous films.

Less than half an hour away from the Atlas Film Studios, scenes from many movies have been filmed in both locations.

Dating from 1954 to the present day, movies shot here include Alibaba and the 40 Thieves, Jesus of Nazareth, The Mummy, Indianna Jones, and Game of Thrones.

In Game of Thrones, it was here where Danerys, the spellbinding, indomitable Dragon Queen played by Emilia Clarke, defeats the slave merchants of Yunkai.


Monumental filmsets include Lawrence of Arabia
A building still exists from the multi-award-winning epic Lawrence of Arabia made in 1962 with legends such as Peter O’Toole, Omar Sharif, Alex Guiness and Anthony Quinn.

Directed by David Lean, the masterpiece is based on the life of T. E. Lawrence, a British archaeologist, army officer, diplomat, and writer. Lawrence was renowned for his instrumental role in the Arab Revolt and the Sinai and Palestine Campaign against the Ottoman Empire during the First World War.


Authentic backdrops continue to appeal to filmmakers
In Gladiator, a purpose-built arena to resemble a mud brick arena with a 30,000-seating capacity was constructed by the crew at the foothills of Ait Ben Haddou. The arena was the focal point for the nail-biting sequence when Maximus (Russell Crowe) triumphs over his opponents in dramatic one-to-one combat.

Rightly lauded as among the world’s most iconic landmarks with its towers and steep walls, the fortress of Ait Ben Haddou has changed hands between nations and governments.

Boasting a rich and colourful history, the site which has been fortified since the 11th century, has since been occupied by the French, Berbers, Romans, and Arabs.

No doubt the historical drama and political intrigue played out here could well match the fictitious and spectacular plots filmed with the world’s most illustrious actors.

Take a look at Visit Morocco
The Atlas Film Studios are located near the airport at Ouarzazete on the road to Marrakech. Time for Life also recommends extending your adventure to take a life-changing trip into the desert. You can read their article here: Take The Hump Or Make The Jump?

Time for Life took their trip to Atlas Film Studios and Ksar Ait Ben Haddou from Marrakesh with Marrakech City Life https://marrakechcitylife.com/.
They flew to Marrakech from Heathrow with British Airways.

You can follow Sharon and Steve’s eclectic travels on www.leaveworktotravel.com
Also by Sharon Cain...
Lisbon: The Ultimate Lifestyle DestinationTake The Hump Or Make The Jump?What New Highs Will You Aspire To?Sensational: Sunrises, Sunsets, SeafoodSomewhere For The Weekend: Pulsating Porto On The Douro
More in this series...
Bellissimo Bilbao - Shimmering Spanish JewelCoastal And Country Treasures: Northumberland’s WonderlandSomewhere For The Weekend : ‘La Dolche Vita’ Welsh StyleWeekend Away: Northumberland: Where Ewe’ll Be Warmly Welcomed!Is Motorhoming For You? – Here’s What Not To Do!Northumberland: A Coastal, Castle And Canine Wonderland