Emily Writes Such a Good Letter

Mabel was married last week
So now only Tom left

A touch of the old trouble

We have seven bedrooms
And an annexe

Which leaves a flat for the chauffeur and his wife

We have much to be thankful for

Yes, I remember Maurice very well
Fancy getting married at his age
She must be a fool

You knew May had moved?
Since Edward died she has been much alone

No, I know nothing of Maud
I never wish to hear her name again
In my opinion Maud
Is an evil woman 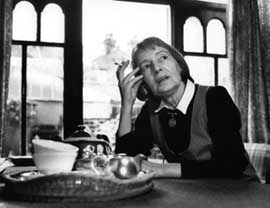 Stevie Smith in 1966
Stevie Smith’s poem of loneliness and isolation is a masterwork of revelation by inference. The stilted cultural architecture of nineteen thirties Kent is given up in stage whispers by a narrator whose, on the surface vacuous, monologue is shadowed by the bitterness of failure.

The philosopher and literary critic Mikhail Bakhtin would have had a field day with conflicting ‘voice’ in Smith’s stream of consciousness, for the narrator’s own is everywhere counterposed by the suggestion of others, whose lives and experiences are mediated in the retelling: filtered through the single dimension of her pinched provincialism, the received picture is necessarily skewed, the ‘antagonists’ – the char, the vicar, Maud – condemned to an uneasy silence.

We hear tonal echoes of the vocal interjections of Eliot’s Wasteland here, and, in Smith’s skilled rendering – the poem, like ad hoc speech, is unpunctuated, leaving a deliberate and resonant hiatus at ‘It was cancer’ – we are privy to an (in)eloquence of twittering in a box, a manifestation of a mannered existence, strangled by the prevailing social appurtenances of the Home Counties middle or upper middle classes.


Also by Steve Whitaker...
The Swamp Ghosts Of Pripyat: Stalking The Atomic City By Markiyan KamyshThe Endless Opportunity Of Words: Lanyard By Peter SansomPoem Of The Week: Wheel By Stephen DeePoem Of The Week: The London Dinner Party By Jayne JosoPoem Of The Week: The Vote By Ralph Dartford
Many of Smith’s poems are characterised by an anxiety of mental isolation, and in ‘Emily Writes Such a Good Letter’, a sense of loss is borne out with the dramatic efficacy of a Talking Heads, direct-to-camera vignette. That we respond to the narrator’s voice with a complex mixture of contempt and empathy gives notice of a subtle poetic mind, with a predilection for irony and ambiguity.


‘Emily Writes Such a Good Letter’ is taken from British Poetry since 1945 and is published by Penguin Books.