Ordinary Evil: A Spoonful Of Murder By J. M. Hall 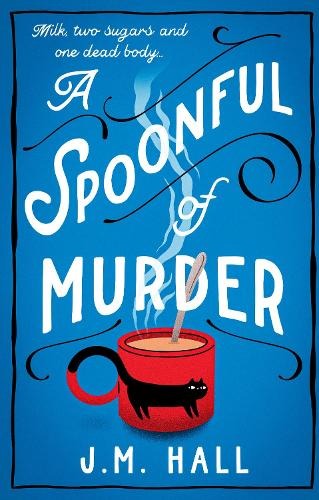 Coincidences do happen. I was house sitting for a friend recently and, investigating the area, I discovered Thirsk Garden Centre. Well worth a visit with its lovely café and shop. When I got back to relax in the sunshine, I picked up my new book and it began in….Thirsk Garden Centre! Now that’s spooky.

It also appeared very early on that I recognised, even identified with, the three central characters: women of a certain age, retired teachers to boot, albeit in this case, primary school teachers. The reference to Jackie magazine and the Banda machine which used to live in every staff room simply made me feel more at home.

There was humour certainly, but don’t disregard this novel as simply a light and entertaining read. It is thought-provoking as it explores the difficulties of living and coping with dementia...
As they enjoy their weekly meeting for 'coffee, cake and conversation', three friends naturally gravitate towards local events, that is...they indulge in gossip. Each is a wholly believable character with their own worries and niggles and the friendship is easy and relaxed. Hall allows us time to get to know them before events really get going. Thelma, is outwardly strong and practical and can always 'find the exact words the other two are fumbling for'. Childless, and married to a college professor, she fills her days with charity work - hiding a heartbreaking secret. Pat is bright and attractive, the wife of Rod, (a builder) but worries about her youngest, teenage son, Liam. Liz is a lifelong worrier with a sweet and sensitive conscience, most likely to be on hand when someone is needed 'to dispense tissues, wipes, and make gentle conversation'.

On this particular Thursday, by chance, their friend and former colleague, Topsy Joy, joins them and sits down for a chat. She is with her daughter Kelly Anne who is quick to disappear when her phone rings and the three friends realise Topsy seems to be struggling with the early signs of dementia. Only a week later they are discussing Topsy’s sad and sudden death. Despite the best efforts of her daughter, the idea that 'Mum muddled' her tablets and inadvertently overdosed, while Kelly Anne was away for the weekend, doesn’t sit well with Thelma, Liz and Pat, who become unlikely investigators.

The book is gentle in tone and has a good mixture of humour, sadness, and mystery.
I loved the conversational style of dialogue, the observational comments and the asides which were almost worthy of Alan Bennett. Was the voice that of Hyacinth Bucket or Mavis Riley? It was hard to tell. There was humour certainly, but don’t disregard this novel as simply a light and entertaining read. It is thought-provoking as it explores the difficulties of living and coping with dementia; the unscrupulous 'thieving bastards' who prey on the vulnerable: the seemingly helpful voice on the phone from 'your bank', intent on defrauding decent folk of their hard-earned savings; the con man who offers to do jobs that don’t need doing for a lot of money which needs to be paid in cash. Hall explores the desperate measures some people will take to make ends meet, the rights and wrongs of justice – and the junk mail, so much of it announcing fabulous offers, but never living up to expectation. It’s all there - so many threads woven into the fabric of realistic everyday existence, and touching, in some cases poignantly, on the effect our actions can have on those around us. As Thelma often wonders, when there are no children who will look after the senior citizen trying to navigate this minefield?

The style was slow and meandering, especially at first, and I often put the book down, wondering when it would ignite, but each time, I was drawn back to pick it up to read ‘just another couple of chapters’ until I was hooked. It’s a character-based crime novel and the characters are endearing and believable. Certainly, they want to find out the truth about what happened to Topsy but there’s also a reluctance rather than a supreme self-confidence, a feeling that maybe they shouldn’t be getting involved in things about which they know nothing.

The book is gentle in tone and has a good mixture of humour, sadness, and mystery. Hall says he called upon his own experiences of looking after his father when he was suffering with dementia, and in amongst the mayhem, there is a sincerity shining through.


A Spoonful of Murder is published by Avon
Also by Artis-Ann ...
‘So Many Dead In The Ashes’ : Dust Off The Bones by Paul HowarthMelody Of Peace: The Electric By Tim MurgatroydHe Knows I Know He Knows: Cradle Song By Robert EdricThe Best And The Absolute Worst: The Dressmaker’s Secret By Lorna CookCrimson Soil: Only Killers And Thieves By Paul Howarth