search
date/time
frontpagebusinessartscarslifestylefamilytravelsportsscitechnaturefictionwhatson
No cookies. No tracking. No advertising.
sports 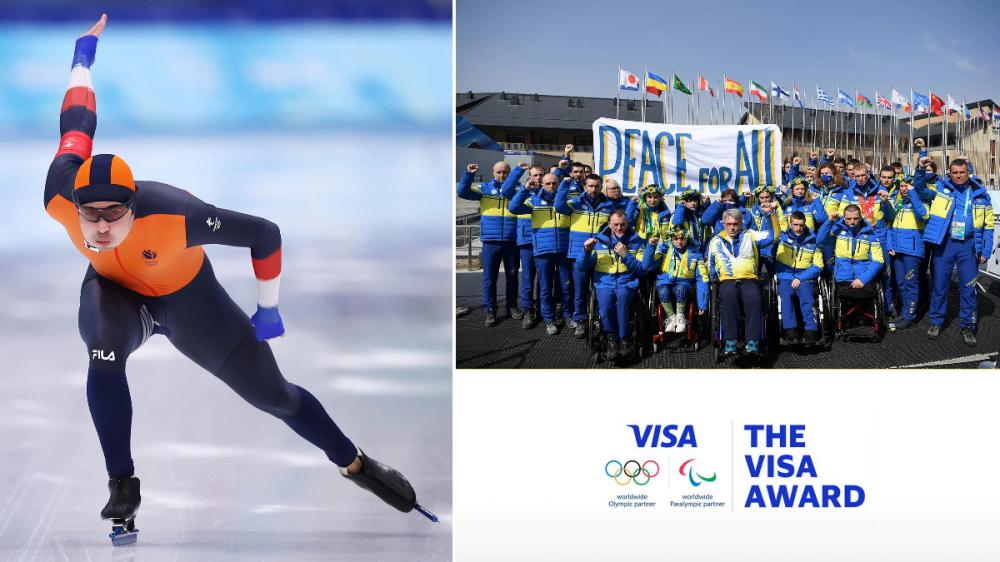 Getty Images - Kai Verbij, Ukrainian National Paralympic Team
The winners of The Visa Award from the Olympic and Paralympic Winter Games Beijing 2022 – Dutch speed skater Kai Verbij and the Ukrainian Paralympic team – have selected UNICEF Netherlands and the National Sports Committee for the Disabled of Ukraine as their respective charities for a USD 50,000 donation to each from Visa.

In addition to the USD 100,000 Visa is donating to The Visa Award winners’ selected charities, the company will donate an additional USD 100,000 towards helping the Ukrainian Olympic and Paralympic communities during these difficult times. Half (USD 50,000) will go to the IOC’s Solidarity Fund for the Ukrainian Olympic Community, which the IOC established in collaboration with Olympic Solidarity and the European Olympic Committees. The Fund is to be used to alleviate the impacts of the humanitarian crisis in Ukraine and is directed towards the entire Ukrainian Olympic community. The other half will go to support the National Paralympic Committee of Ukraine.

About Kai: Kai Verbij was selected by fans for the moment he decided not to jeopardise his opponent’s chances of a medal with a risky overtake on the final stretch of the men's 1,000m final. The chances were high that if Verbij had attempted the move, he could have crashed out along with his opponent, Canadian skater Laurent Dubreuil. However, in a split-second decision, Verbij showed great sportsmanship, opting to back off, which allowed Dubreuil to safely win his first Olympic medal.

In his words: “I think sport needs to reward sportsmanship over personal success, and it’s even more important in the Winter Olympics where there's a lot of individual sports. I saw the shortlist of the athletes nominated for The Visa Award and there were some great names. I really didn't expect to win, so I was really surprised to find out I had won.”

On the moment itself, he added:
“I’ve had some critics that said I should have just gone for it and taken the risk by trying to overtake Laurent, but he didn’t win silver because of me. He’s an excellent skater and fully deserves the medal. You always question if you made the right decision in that split second, but at the same time, I'm really proud that people from around the world voted for this award, acknowledging my decision. It has made me feel like I made the right choice.”

Selected Charity: Verbij selected UNICEF the Netherlands for the work it does in areas experiencing conflict across the world, and specifically in Ukraine. "I am passionate about UNICEF's work for children worldwide,” said Verbij. “With this donation I would like to contribute to a better future for children who are affected by circumstances beyond their control. My heart goes out in particular to the children in Ukraine and UNICEF's work with the Blue Dots, providing a safe, welcoming space to rest, play and simply be a child."

About Team Ukraine: The Ukrainian National Paralympic Team captivated people across the world by overcoming incredible obstacles to make their entrance at the Beijing 2022 Paralympic Winter Games' Opening Ceremony, as they were welcomed with a warm round of applause from the stadium audience. Through voting for The Visa Award, this emotional and courageous moment for Team Ukraine was almost unanimously recognised by fans as the most inspiring moment of the Paralympic Games. The Ukrainian team went on to finish second in the medal table at these Games.

Speaking on behalf of the Ukrainian Paralympic Team, its President, Valeriy Sushkevych, said:
“Thank you very much on behalf of all members of our community for voting and awarding us The Visa Award. This prize is very valuable for us as it will help us continue our activities, help athletes and persons with disabilities in Ukraine, and fight for peace in our country.”

Selected Charity: Team Ukraine selected the National Sports Committee for the Disabled of Ukraine, which was established by the National Paralympic Committee of Ukraine to help ensure that their Para athletes could continue to train and represent their country in international competition. The fund also supports the Ukrainian Paralympic Centre in western Ukraine, which is currently supporting 500 Ukrainian refugees, including a group of children with disabilities.

Designed jointly by the International Olympic Committee (IOC), the International Paralympic Committee (IPC) and Worldwide Partner Visa to engage and connect audiences around the world during the Olympic and Paralympic Games, The Visa Award is also aimed at encouraging people around the world to believe in and support each other in line with the three organisations’ core values: friendship, acceptance and inspiration.

The Visa Award was first introduced for the Olympic and Paralympic Games Tokyo 2020 and was won by the 13-year-old Brazilian Olympic skateboard phenom, Rayssa Leal, and Paralympic gold medallist from New Zealand Holly Robinson. Leal was awarded the accolade following her display of sportsmanship towards her opponents during the women's street competition, in which she took the silver medal. Robinson, who won the women’s javelin F46 event, was selected by fans for taking the time to recognise and thank all the match officials on the field.