“Love All, Trust A Few, Do Wrong To None”: Leave The World Behind By Rumaan Alam 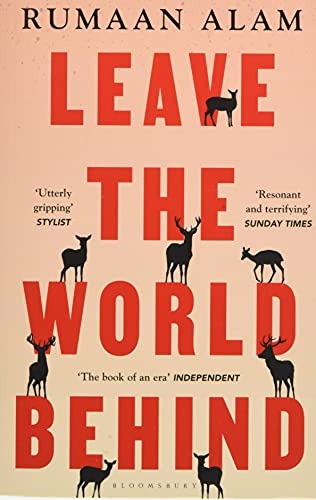 Leave the World Behind is the third novel by US author Rumaan Alam. An urban family – mother, Amanda; father, Clay; and their two children, Archie and Rose – go to stay at an idyllic holiday home in the country. The home is hyperreal in its quaintness, eliciting Little House on the Prairie vibes: “The front yard was bound by a picket fence, white, not a trace of irony in it”. But a Lynchian air of menace is present from the outset – the description of the fence presaging that the little nuclear family will at some point be hemmed-in!

A strong theme of “city versus country” pervades the novel. The protagonists are city-types and consequently very much cowed by the still wilderness of the countryside upon arrival: “Everything was so green it was frankly a little crazy. You wanted to eat it, get out of the car, get down on all fours, and bite into the earth itself”. The place seems strange and alien to them, as if they’ve landed on another planet. Amanda (so wonderfully uptight) is a careerist, checking her mobile phone constantly for e-mails, and unable to leave her work behind. So, too, are the children glued to their respective devices. And Clay, the de facto head of the household (for in reality, Mummy’s the daddy), heads out at one point to undertake a recce, and manages to get hopelessly lost.

As the family settles in, all is well for a time – that is, until a major blackout is reported, their phones and tablets lose signal, and their TV screen turns blue. Then, one evening, they hear a knock at the door. An older black couple, George and Ruth, arrive, claiming to be the owners of the property. They explain that they were in the area, en route to their primary home when the blackout struck, and ask if they can take shelter with the family until morning. This development is reminiscent of the opening pages of J. B. Priestley’s Benighted, in which a group of strangers are similarly flung together by desperate circumstance, and forced to pull together. But Amanda and Clay’s immediate thought is: can they trust them?

From the outset at least, George and Ruth appear agreeable and kind, albeit their intentions seem inscrutable. While as readers we, too, scratch our heads and try to figure out what’s happening, this turn of events reads less like the manner of home invasion seen in, say, Ian McEwan’s Saturday, than something more benign. Indeed, with the turn of each subsequent page, George and Ruth only appear more likeable. We also see a clever switch of viewpoint as the omniscient narrative lets us into the couple’s private thoughts, helping us to learn more about them, their family, and their attitudes and values.

If anything, the ones with work to do on their moral character, it seems, are Amanda and Clay. Amanda, in particular, is deeply prejudiced: “This didn’t seem to her like the sort of house where black people lived”, she carps in private. At first, they’re reluctant to invite the couple in, and protracted scenes of social awkwardness follow, with Amanda and Clay skirting around the point rather than extending the hand of welcome. Amanda’s ultimate response is, “But we’re staying here”, demonstrating how even in the event of crisis she’s more concerned about having her vacation interrupted than ceding jurisdiction of the home to its rightful owners. George and Ruth, on the other hand, are infinitely reasonable and even offer a thousand dollars’ compensation on the spot. Eventually, Amanda and Clay decide to be good Samaritans … once they have a cash incentive. 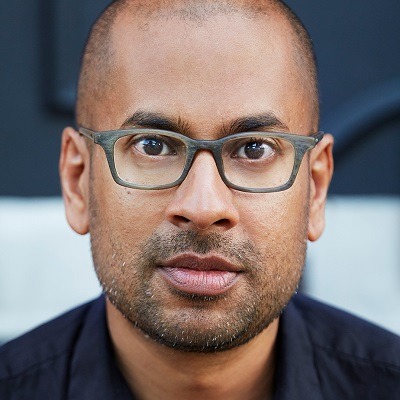 Rumaan Alam
As the days go by, tempers are tested further due to the lack of news. Conspiracy theories abound, ranging from asteroid collisions to freak weather incidents, nuclear accidents, and terror attacks. We may begin to think, here, that the action, with its single location and multiple characters clashing, is about to go the way of Sartre’s No Exit, in which “Hell is – other people”, as all manner of paranoia is unleashed, and each character bounces pinball-like from one ill-conceived catastrophe to the next. And certainly, there are many philosophical gems to be had along the way. For example: “There was no real structure to prevent chaos, there was only a collective faith in order”. Indeed, reading through each chapter and picking out such modern truisms feels rather like panning for gold.

Soon, the situation worsens when, in a rare moment of quiet, an eerie, glass-shattering sound is heard overhead. Next the children fall inexplicably ill, choking up blood and spitting out teeth. “The house, had seemed so alluring,” Amanda reflects. “It didn’t feel safe anymore.” But the crisis developing beyond the home is more a metaphorical amplification of the turmoil unfolding within. Dr Susan Maher, writing in The Lion and Unicorn academic journal (2005), notes that “Houses are omnipresent constructs in our literary traditions, so essential to human identity … Within the house … one measures one's development … Home ... remains in creative tension with a protagonist's need to grow, change, and individuate”. Indeed, in Leave the World Behind, we do see Alam’s characters develop for the better. In this house, we finally see former prejudices shattered as the characters pull together throughout the crisis. They come to accept one another, live together, and share resources. “She was at peace with these people,” Amanda finally realises. “They knew one another now.”

At this point, you may wonder what Leave the World Behind is trying to express. If we’re meant to deduce that this is simply a case of our ossified protagonists learning to put aside their misplaced and outdated prejudices, and come to terms with those outside their usual sphere, what then is the novel offering that the likes of Guess Who’s Coming to Dinner didn’t envisage some fifty years prior – a work Alam actually makes reference to in a wry aside?

It is then we realise the message is broader, that prejudice, ironically, has become boundless and unbiased, a universal constant to which everyone is fair game. In Alam’s world, it is no longer a question of “us” versus “them”, more a case of “me” versus “you”. As the crisis worsens, help is neither given nor received by anyone. Clay, whilst on his travels, leaves a woman stranded by the roadside; later, when he and George both approach a neighbour for help, both are turned away. The overriding message, therefore, is that all people have grown insular and forsaken one another. There is no longer a sense of community spirit, no pulling together in a time of crisis. As his characters reflect - “Maybe no one, however much in love, cares about the minutiae of someone else’s life … Urban life contained only the guy who came to deliver an Amazon box”.


Also by James Goodall...
A Helping Hand“I Think Therefore I Am”: Daniel F. Galouye’s Simulacron-3Q & A With Susannah Wise, Author Of This Fragile Earth“Where Men Can’t Live, Gods Fare No Better”: This Fragile Earth By Susannah Wise
A sad indictment of our times, indeed, if there is any truth in Alam’s reading of our present way of life, and our treatment of one another. But I’m not certain we’ve quite reached this ontological nadir just yet. Certainly, during the COVID-19 crisis, there have been mean-spirited acts, but also many instances of charity. Suffice to say, the kindness of strangers may still be counted upon. Let us hope, then, that Alam’s impression of human morality is merely dystopian in outlook – a worst-case scenario, a telling of how bad things could become.


Leave the World Behind is published by Bloomsbury