“I Think Therefore I Am”: Daniel F. Galouye’s Simulacron-3 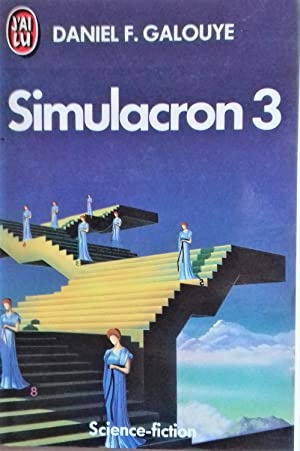 Simulacron-3 (1964) by Daniel F. Galouye isn’t an easy book to find. Copies seem to exist predominantly in French. Indeed, first time around, I did inadvertently purchase a copy in French, which was useless to me, of course, being a typical monolingual Brit! The book’s front cover heralds it as “THE BIRTH OF CYBERPUNK” in bright uppercase letters, yet I’d never heard of it until Richard Dawkins referenced it on a podcast. I enjoyed it immensely and, when the time came, was sad to bring the reading experience to a close.

Despite the aforementioned tagline intimating that Simulacron-3, a.k.a. Counterfeit World, is the pioneer of its genre, the book seems to have been somewhat overlooked, with other notable works such as William Gibson’s Neuromancer (1984) instead laying claim to the title. Galouye’s work, however, was ahead of its time by a good 20 years and paved the way for many imitators. Its influence can also be seen in the movies Tron (1982) and The Lawnmower Man (1992), which utilised innovative special effects to bring to life many of the images within Galouye’s pages.

The world of Simulacron-3 contains many of the ingredients we typically expect from the sci-fi genre – notably flying cars and laser-based weapons. Interesting additions, however, are Galouye’s “pedistrips” or vast metropolitan treadmills, reminiscent of H. G. Wells’ shifting city platforms in The Sleeper Awakes (1899).

Our protagonist Douglas Hall and his team at Reactions Inc. are working in the field of VR and have constructed a “total environment simulator” – an early prototype of Star Trek: The Next Generation’s holodeck, if you will. Though as its assignation implies, this is their third attempt at the endeavour. Through Simulacron-3, the team have successfully created a virtual macrocosm (i.e. said “counterfeit world”) containing a virtual population, or “subjective reaction units”. Doug and his team can project inside by temporarily assuming the consciousnesses of these subjective reactive units – much as the agents do in The Matrix (1999) when “mov[ing] in and out of … software still hardwired to their system”. Withdrawal from the coupling has to be voluntary, however; they can’t just be disconnected from the outside by a colleague or death will be the result – again, as we see in The Matrix when the character Cypher pulls the plugs on his shipmates Apoc and Switch.

Things start to go awry when Doug’s friend and supervisor on the project, Hannon Fuller, mysteriously disappears, presumed deceased following a tragic accident within the simulator. Shortly afterwards, the company’s head of security, Morton Lynch, also vanishes en route to deliver evidence of a secret he’s uncovered. Then the company secretary can no longer be accounted for. Moreover, Doug is the only one who remembers them.

Consequently, Doug suspects a conspiracy is afoot – that the people of his world have somehow been supplanted by the subjective reaction units. A cyber treatment of Invasion of the Body Snatchers, in other words! “Just as the observer’s ego was temporarily planted within the ID’s storage unit,” he explains, “so might the latter’s sweep up and impress itself upon the brain of the observer in a violent, instant exchange”. Indeed, he soon witnesses such an incident when the VR entity Phil Ashton escapes from the simulator and trades places with his assistant, Chuck Whitney – again mirroring The Matrix when Agent Smith possesses the conscious mind of the Zionite Bane.

But Doug learns a greater truth from Ashton, the secret that Lynch attempted to disclose. There is no distinction between Doug’s reality and that of Simulacron-3. Doug’s reality is in fact a mid-level simulation, operating below an “Upper Reality”. Reality in Galouye’s tale, therefore, is a stratified model, Matryoshka-like and multilayered. Imagine how crestfallen Neo would’ve been, having escaped the matrix only to be told Zion wasn’t the end point! In a fabulous scene, Doug quite literally reaches the perimeter of his world and encounters “an impenetrable barrier of Stygian blackness”. But when he does a double-take, he discovers the void has been quickly filled in, the powers that be having hastily generated some additional scenery. Doug realises this was why Fuller was disappeared. He was the first to discover the secret. Similarly, when others have made the same discovery or come close to learning it, they too have been disappeared and all collective memory of them erased.

Doug’s sense of self is predicated on the notion that he is an “analog” entity as opposed to a simulated representation. This is etiolated, however, upon discovering the secret – that he, too, is merely an artificial construct. Simulacron-3 thus becomes solipsistic in tone and references Descartes’ Discourse on the Method directly: “I had to exist!” Doug exclaims. “Cartesian philosophy provided ample refutation of my self-doubt: ‘Cogito ergo sum: I think, therefore I am’”.


Also by James Goodall...
A Helping Hand“Love All, Trust A Few, Do Wrong To None”: Leave The World Behind By Rumaan AlamQ & A With Susannah Wise, Author Of This Fragile Earth“Where Men Can’t Live, Gods Fare No Better”: This Fragile Earth By Susannah Wise
But once the secret is discovered, there is no going back. Just as Ashton refuses to return to the world of Simulacron-3, having taken a step closer “to the real reality”, so too does Doug realise he’s figuratively taken The Matrix’s symbolic red pill. As Morpheus explains in The Matrix, “The mind has trouble letting go”.

Doug is the only character who realises (and remembers) he’s participating in a false consciousness.
Whereas his friends and colleagues are oblivious to the fact they’re on a stage, having either been removed from the simulation or reprogrammed to forget, Doug is somehow immune. This makes him dangerous to the operator of the upper reality, who programmes Doug’s colleague, Avery Collingsworth, to try and debunk his conspiracy theory. But when this fails, the operator’s only recourse is to try and eliminate Doug, totis viribus. Thus, Doug has a near miss with an out of control air car, escapes a bomb blast while plugged into VR, and avoids a number of natural disasters at his retreat in the woods.

Doug then teams up with Jinx Fuller, Hannon’s daughter. Jinx, we learn, is from the upper reality and has projected herself into Doug’s mid-level reality. Furthermore, we learn that the operator of the upper reality is in fact the original Doug. Suffering from a form of Dorian Gray effect, the operator wanted to create the perfect representation of himself in VR – a flawless version that would never grow old or depreciate. Consequently his former lover, Jinx, comes to prefer the simulated Doug in the mid-level reality, which is effectively hyperreal due to the operator’s defectless design. “I was more the Douglas Hall you had fallen in love with,” he says to Jinx.

Doug and Jinx come to love each other and try to flee together, though their every attempt is stymied by the operator. We learn that the operator is a sadist, single-handedly manipulating the mid-level reality like a power-mad god – hence Jinx’s rejection of him.

The plot then intensifies as Doug finds himself fighting not only for his life but also for his world as the operator threatens to pull the plug. But as the action climaxes, Jinx engineers it so the Doug of the mid-level reality can trade places with the operator. To his surprise, Doug finds the upper reality in many ways analogous to his own, which is convenient, enabling him to transition easily to his new life there with Jinx.

Simulacron-3 has cast a long shadow. If the idea of “waking up” to a higher reality sounds familiar, well, this is the basic premise of The Matrix. And yet Simulacron-3 was published some 35 years before The Matrix hit our cinema screens. Its parallels are glaring yet, from my researches, the Wachowskis’ don’t appear to have ever cited it as an influence. The idea of “waking up” from a humdrum rectilinear reality has never quite petered out since the success of The Matrix. Indeed, ten years later, in Transition, we see Iain M. Banks’ characters similarly ingesting mysterious pills in order to navigate an infinitude of temporalities.

I was curious to know how many levels of reality there were in Simulacron-3. Galouye implied that the “Upper Reality” was the ceiling, but I wondered if that was truly the case. He does echo my question at one point: “How do we even know that the realest of realities wouldn’t be subjective in the final analysis? Nobody can prove his existence, can he?” And this turns the question neatly against ourselves. How do we know our own reality isn’t a sham?

Simulacron-3 is published by Phoenix Pick.