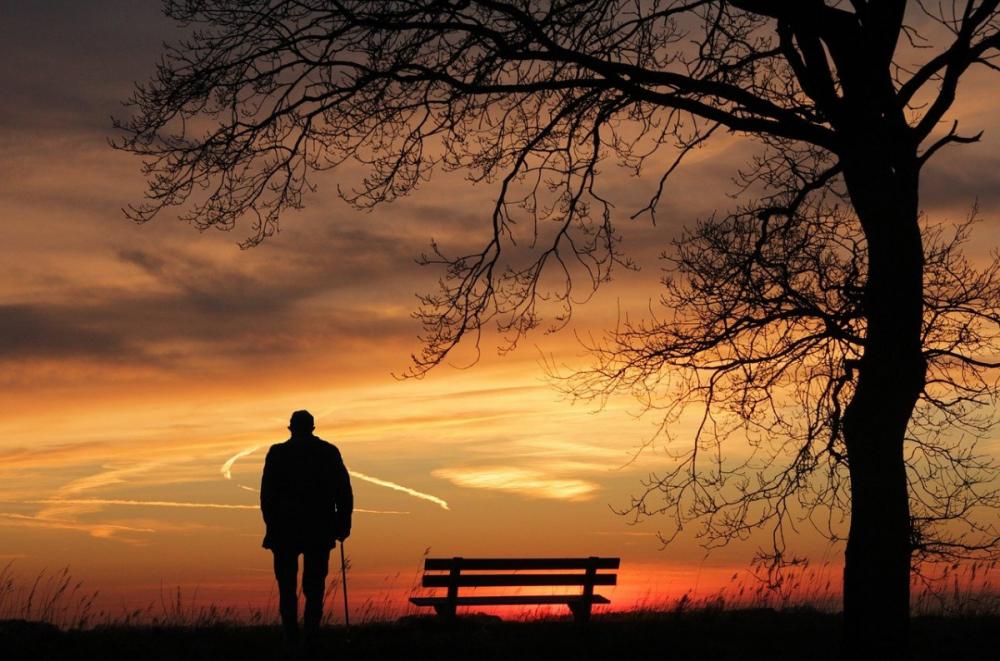 When you’ve been married for sixty-six years, it is a great shock when your wife dies. It was especially so for my Grandad Lord, as he had, as the expression had it, ’been waited on hand and foot.’ For a start, he didn’t know how to tie his own tie; Grandma had always done it for him. He had never so much as boiled an egg. The only domestic task he knew how to do was to make a pot of tea. Every morning, Grandad would be at our house at seven o’clock, so Mum could tie his tie for him – until she insisted he learn to do it for himself. He somehow managed to pick up the rudiments of cooking simple things, as he liked his food, and my mother, I am sorry to say, was fairly incompetent in the kitchen. She said this was because her mother – Grandma – had never allowed her to do any cooking when young, insisting on doing everything herself. As Grandma was wont to say, “I can do it whilst others are thinking about it.”

Just to digress: my mother once invited some relatives for a meal. When they arrived, she gave them a sheet of paper, on which she’d written what she would have cooked, but hadn’t. They had to imagine their dinner.

Anyway, it was not long after the funeral that Grandad decided this couldn’t go on.

One morning he arrived at our house and said he’d an announcement to make. Mum, Dad, and I had to sit down whilst he made it.

“I may as well tell you,” he said, “I’ve decided to get married again.”

We all stared at him. It was only two months since Grandma had died.

“I haven’t decided yet,” Grandad replied. “I’ve made a list.”

“A list of possibles. There’s a lot of widows round here. What I thought was, I’d get them to make me some buns, and see who’s the best cook.”

“Is that it?” Dad said. “You’d marry someone because she can make good buns?”

“It’ll do for starters. I’ve crossed out the skinny ones.”

I thought my parents would explode, Mum with horrified indignation, Dad with barely suppressed laughter. I was trying to keep a straight face as well.

“When are you starting this contest, Grandad?” I enquired.

“Well, right away, but I thought I’d better tell you first. I expect there’ll be a bit of gossip.”

And with that, he went. Dad couldn’t contain himself any longer. He was almost choking with mirth. Mum was furious.

“I don’t know what you find so funny! Getting married again! Making lists of ‘possibles’! And he’ll be eighty-eight in a couple of months. I don’t know what he can be thinking of. My mother must be turning in her grave!”
“She was cremated,” I said.

Grandad’s campaign got under way. Top of his list was Mrs. Crowther from the end of his street. He had great hopes of her, as she was a buxom lady who had been widowed a long time. He got her, with no difficulty, to make him some buns. He was very disappointed when he reported back to us.

“That’s her off my list. I had to throw them in the fire-back.”

Mum said, “You can’t expect anyone to be able to cook like my mother, you know.”

“She could try, couldn’t she? No, I’ll have to think again. I’ve a good half-dozen on my list yet.”


Also by Kaye McGann...
The Morning AfterMy Friend RosemaryNo Fool Like A Young FoolFriday Night Is Amami NightGrandad Decides To Die
We were bemused to find the neighbourhood widows were all after him anyway, so he didn’t have to make much effort in his quest. They were falling over themselves, bringing him various things to eat and so on. Whenever I visited, there was always some elderly lady fluttering round him. Not one of them, though, fulfilled Grandad’s criteria. Either they were too skinny, or he didn’t like their baking.

It got to the end of June, and he was no further forward. My mother hoped he’d forget about it. Some chance!

One bright Sunday morning, he breezed in, looking very cheerful. “I’ve decided who it’s going to be,” he said.

Mum sat down suddenly. We all waited. “It’s Maggie from Oldham.”

“Maggie?” Mum asked. “You don’t mean Cousin Arthur’s widow?” (Maggie was seventy-two years old. It was many years since Arthur had died.)

“But she was married to your nephew!”

“When was this all arranged?” my dad said, heading off an argument. “You’ve kept it very quiet.”

Dad sat down heavily, too. He and Mum were speechless. It was left to me to find out what was going on.

“What makes you think she’s going to marry you, Grandad, if she doesn’t know anything about it?”

“I’ve written her a letter asking her over next Saturday, and I’ve sent a postal order for one-and-six for her bus fare.”

(For those who don’t know pre-decimal currency, one shilling and sixpence converts to seven-and-a half pence now, but the equivalent of approximately two pounds nowadays.)

We heard no more about it until next Saturday afternoon. Grandad arrived, looking very subdued.

“She turned me down. I’ve never been turned down by a woman in my life before,” Grandad replied.

“What do you mean? You’ve been married for sixty-six years!”

Grandad said, “I’m not talking about that.”

Well! Who’d have thought it!

“I gave her one-and-six for her bus fare back,” he said plaintively.

On Tuesday Grandad was back at our house, looking very pleased with himself.

“She’s changed her mind!” he said. “I’ve had a letter off her, and she’s said yes. She’s going to give up her house in Oldham, and come and live with me. I’ve just sent her another postal order for her bus fare, and told her we’ll get wed this next Saturday, so I’m off now to get a special licence.”

And with that, not waiting for a response, he was gone.

Things moved really fast. Dad booked lunch for six at the Wellington Hotel for next Saturday after the ceremony, and I asked Bill, my friend since we were six years old (and still my friend, all these years later), if he would come too.

So, on the day itself, there were six of us at the Register Office. Bill and I found it very funny. OId people getting married struck us as hilarious, which can be excused as we were only seventeen, and didn’t know any better. When we found the Registrar’s name was Barry J. Digweed, I thought we’d burst. Somehow, we stifled our giggles. When the vows had been exchanged, Barry J. Digweed pronounced Grandad and Aunt Margaret man and wife.

“Is that it?” Grandad asked. “Aren’t you going to offer up a prayer?”

“Er, no Mr. Lord. This is a civil ceremony. We don’t have prayers. You have to say your own, if you want any.”

“Well, I make nought of this,” Grandad said.

Of course, the sudden wedding was the talk of the neighbourhood. The first time the newly-weds walked out together, a group of women, including many from ‘the list’, stood together, whispering.

“We’re just going getting a pram,” Grandad called out to them.

The next we heard of Barry J. Digweed, he was conducting Ringo Starr’s marriage ceremony, at Chelsea Register Office. I bet it wasn’t any more memorable than my Grandad’s.
Next Episode