When Is A Party Not A Party?

It’s time once again to fire up the DeLorean and travel back in time so that we can find out what really happened last Christmas at 10 Downing Street. If we are to believe government ministers - and they have given us no good reason why we should – there was a sort of Schrödinger’s Christmas Party, which both did and didn’t take place. 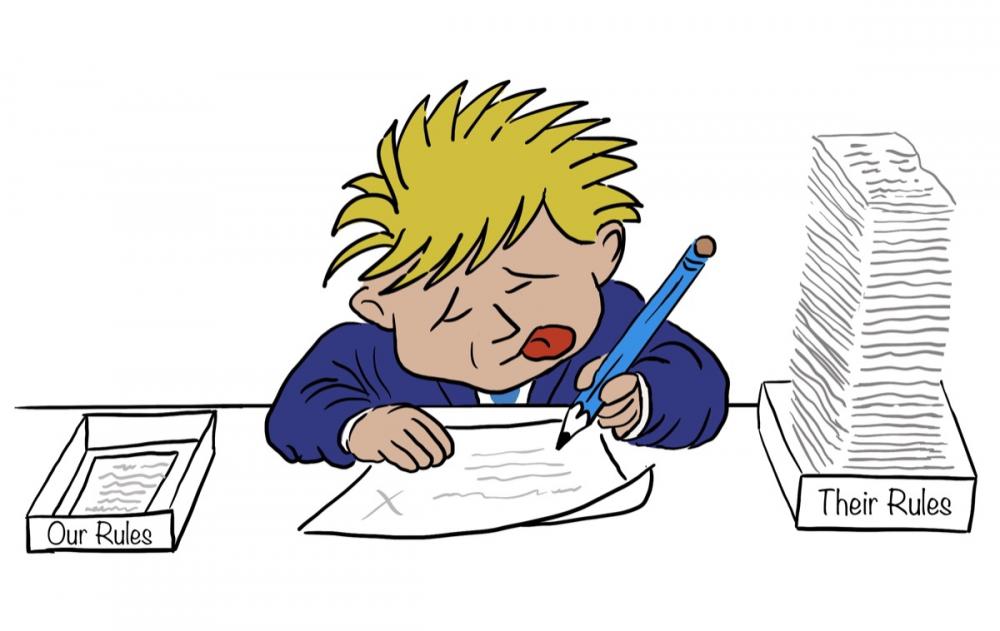 Dominic Raab appeared on The Andrew Marr Show to argue that it was pure speculation that a party had taken place the day after the government had banned all Christmas parties nationwide. He went on to say that he wasn’t going to comment on such speculation, but that if there had been a party, all the rules had been followed. And besides which, he wasn’t there at the party that he wasn’t saying had actually happened.

I’m only surprised the government hasn’t retrospectively invented another pilot scheme to account for it.

Asked whether the police should investigate if an offence had taken place, Raab stated that the police don’t generally investigate crimes that happened a year ago, which is certainly a novel interpretation of police work. At least he’s not the Justice Secretary, eh? Oh.

But then again, the Commissioner of the Met Police, Dame Cressida Dick, showed a similar lack of interest in finding out if the party meant a crime had taken place. Asked on LBC radio if the Met would be investigating, she responded – several times – by saying that she hadn’t received a letter about the party, so they weren’t looking into it. Is this the same Met Police who shot Jean Charles de Menezes dead on the London underground because they didn’t like the look of his jacket?

You wouldn’t think it would be too hard for the Met to investigate the alleged party. After all, they have police officers stationed at the entrance to Downing Street at all times, with logs and security checks of everyone going in and out. Perhaps if there had been some women holding candles, they’d show a bit more interest.

Dick went on to add that the Met were impartial and acted “without fear or favour”. Ah yes, that old chestnut: without fear or favour. Let’s see how that works, eh? Matt Hancock is caught on camera breaking lockdown rules with his lover: we don’t look at criminal offences retrospectively. Dominic Cummings breaks lockdown by leaving London while his family has covid: nothing to see here. Boris Johnson as Mayor of London doles out huge wodges of cash to his lover: that’s all perfectly fine. Christmas parties in Downing Street that contravene lockdown laws are splashed all over the front pages: no one has told us about them. A group of women hold a candlelit vigil in the park to remember Sarah Everard, murdered by a Met officer: lock ‘em all up!

With the Conservatives continuing neither to confirm or deny there was a party, but that all the rules had been followed at it, it sounds as though a Christmas Party means whatever they want it to mean or not mean. As Humpty Dumpty said to Alice, “When I use a word, it means just what I choose it to mean – neither more nor less.” The Tories take much the same approach to the words “new hospital”.

When a government spokesperson was questioned about last Christmas, they responded by repeating seven times that they “did not recognise” the reports. As Wham! wisely said: well, it’s been a year, it doesn’t surprise me.

What amazes me is that, according to the reports in the Mirror, 40 or 50 people attended the Christmas Party in Downing Street. Some might say that there is nothing worse than being snowed in for four days with nothing but an Oasis tribute band to entertain you. These people have obviously never been to a work Christmas Party.

Still, the government has been once again telling us that they are going to “save Christmas” this year. It’s funny how Christmas never needed to be saved before – it always managed to get by quite well on its own, thanks. And look how well “saving Christmas” turned out last year – insisting that Christmas would go ahead as normal, only to change direction at the last minute and ban all socialising. Except their own, obviously. In this case, there was – literally – one law for them and one law for everyone else.

The Mail on Sunday seems very concerned with the risk to Christmas, with its front-page headline declaring: “Now the woke ‘blob’ tries to ban Christmas”. That’s a very unfair thing to call the PM.

Meanwhile, we have even had government ministers advising us whether we are allowed to kiss people or not. Thérèse Coffey said that there should be “no snogging under the mistletoe”, which will come as a relief to all concerned. Sajid Javid, on the other hand, has insisted you can snog who you like. Though do be careful if they ask you in for Coffey afterwards.

While the Conservatives try to tell us how to run our private lives while at the same time avoiding any light being shed on their own potential law-breaking, they have returned to their law ‘n’ order roots and declared a new War On Drugs. Going off the Tories’ track record, it’s probably safe to put your money on the drugs being the victors. Announcing a crackdown on middle-class drug users, the Tories are planning to take away the passports and driving licences of drug users, which might prove awkward for Michael Gove. Do remember, though, you must tell the police before you take any drugs – otherwise they won’t investigate.

Also by Roger Winterbottom...
If Johnson Is On Borrowed Time, When Do We Get Paid Back?Implausible Deniability - Operation Save Big Dog May Need A Bigger Pooper ScooperIt's All Cummings Back To MeParty Favours Or A Gathering Storm For Johnson?Emily Elephant Is Perfectly Fine, But Is Everything Okay With The Prime Minister?