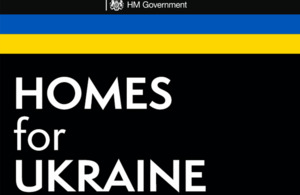 The Ukrainian and UK governments this week will send thank you letters to sponsors and families across the UK who have welcomed Ukrainians into their homes and communities.

Signed by Ukrainian Ambassador Vadym Prystaiko and Refugees Minister Lord Harrington, the letters will praise the collective national effort that has driven the scheme forward.


They are expected to say:
“Together you and your fellow hosts, and the Ukrainian diaspora community, have given 104,000 people safe refuge across the UK. You have saved lives, given hope, and offered sanctuary to people in desperate need. This represents the UK’s largest offer of help to people fleeing war since 1945.”

Since March more than 104,000 Ukrainians have arrived in the UK under the Ukraine Family Scheme and Homes for Ukraine Scheme, showcasing the best of British hospitality and compassion, continuing the country’s proud history of stepping forward in the hour of need. Families and hosts do not just provide housing but welcoming homes, warm friendship and local advice for planting roots in an unfamiliar community.

From day one, Ukrainians have the right to work and to access benefits and public services, including education and healthcare, on the same-footing as UK nationals. This will continue to be the case for those who wish to remain in the UK.