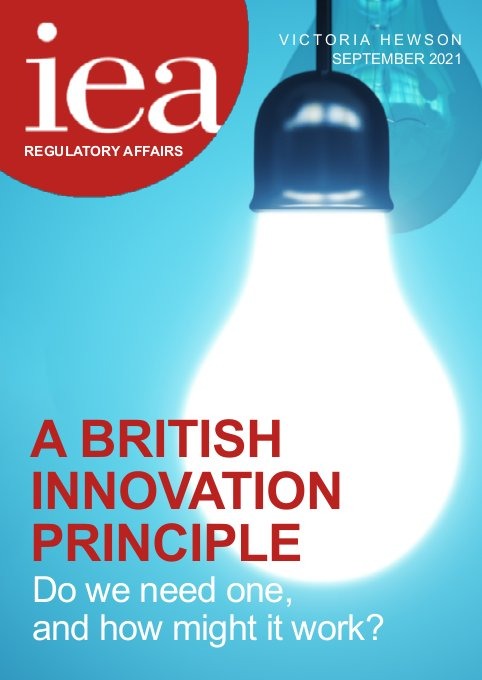 A new paper released by the Institute of Economic Affairs (IEA) and authored by IEA Head of Regulatory Affairs Victoria Hewson argues that innovation is under threat due to the over-application of the precautionary principle.

Post Brexit, the UK is implementing the EU’s precautionary principle into domestic law. It already applies in numerous instances concerning planning, the environment and climate policy and informally pervades regulatory and legislative decision-making even when not explicit.

It is widely recognised that the misapplication of the precautionary principle has led to a decline in competitiveness and innovativeness in various sectors of the economy.

The author warns that there is now a danger that the UK will incorporate the precautionary principle into domestic law without the explicit and implicit protections for innovation in the EU regulatory framework. It is essential, therefore, that there is review of existing regulation and a commitment to innovation going forward.

In areas where the application of the precautionary principle is a binding commitment (such as climate, planning and energy policy), an innovation principle could be added to applicable policy statements. This would ensure that the effects of a proposed measure on innovation are properly accounted for in the context of all available information.

In other fields where there are no such binding commitments, innovation should still be considered with more prominence, both at a strategic level and in impact assessments.

The objective should not be to encourage or pursue favoured sectors, technologies or policies, but should be to avoid unnecessarily restricting innovation – which can prevent or stall the development of safe and useful products and services, from agriculture to digital.

The author acknowledges that it would be politically difficult in the short term to remove the precautionary principle as a legal commitment altogether. Instead, the paper outlines three possible reforms that would improve the regulatory process and foster innovation:

Victoria Hewson, IEA Head of Regulatory Affairs and author of A British Innovation Principle: Do we need one, and how might it work? said:

“The government is consulting on reforms to our regulatory system. This is a great opportunity to improve how cost-benefit analysis is carried out and ensure that we are not losing out on innovations because of an excessively precautionary approach.

“Impact assessments should look not just at possible risks from an activity, but the potential gains to prosperity and the environment from new and better products and services.”
Implement a binding innovation principle to apply alongside, and with equivalent weight to, the precautionary principle.
Invest in training and resources for ministers and officials to use the existing regulatory framework (in particular, impact assessments) more effectively.
Consolidate innovation considerations into a toolkit that ensures due weight is given to innovation, including practical steps and guidance for officials.

The paper does not recommend an innovation principle as a general, legal binding duty on ministers in formulating policy and legislation, rather, the author makes the following recommendations: