That Kyle Rittenhouse was cleared of several murders in a Wisconsin court last week underlines the percipience of Danish academic, Mikkel Bolt Rasmussen’s, thesis in his persuasive new work for Polity. Inflamed by violence at a Black Lives Matter rally in Kenosha, Rittenhouse, a right wing vigilante, took the lives of two protestors and injured another. He escaped punishment on grounds of self-defence, and it looked, to large swathes of onlookers, very like a blind eye had been turned to the facts of the case.

Rittenhouse is a beacon to the huge swathe of far Right populists incensed by what they perceive to be the denudation of ‘white values’ by alien – that is, Black, Hispanic, Muslim – cultural hegemonies, and still smarting at the failure of Trump to get elected for a second term. Rasmussen examines Rittenhouse’s spree (without knowing the judicial outcome), amongst a raft of supporting evidence for the current, and ad hoc, rise of fascism in the West. What may be certain is that the gunman’s freedom from incarceration has been lauded as a victory, if not a turning point, by those who make up the rump of the new anti-political guard.

Rasmussen’s thorough elaboration of a depressingly familiar argument in Late Capitalist Fascism takes steps to avoid confusion with earlier, totalitarian forms of control. His book’s title circumscribes the peculiarities of the modern phenomenon by identifying it as a stage on a temporal continuum. The mass movements of earlier incarnations – especially that embodied in Nazi Germany – of a charismatic leader figure, of collective obeisance before an ideology of unitary purpose and identity, of a yawning sense of historical injustice, and of a ruthlessly controlled propaganda machine, bear relation to the present resurgence most visibly in terms of invented, or reified, grievances. Mobilisation on pretexts of, frequently chimeric and abstract, grudges – disaffection with the apparent stasis of interchangeable political parties, immigration perceived as overwhelming, elegiac longing for a return to the apocryphal landscape of a halcyon past – is now unfolding across Europe and the US. Suggesting that fascism now goes beyond traditional party affiliations to leak into ‘everyday life’, Rasmussen gives a typically sharp synopsis of its causes and social manifestations:

Instead we must seek to understand it as a complex convergence of media-induced mass effects, collective dispositions and political calculations in a call for ‘law and order’ and the exclusion of foreigners. Late capitalist fascism is an arming of resentment on the basis of accumulated frustrations caused by a long economic crisis and the general potential for conflict in capitalism, where an abject ‘we – the people’ demands revenge and lashes out at displaced enemies, primarily migrants, minorities and other groups.

Characterised by sloganising, the promulgation of simple, and effective but vacuous, mantras – MAGA, Get Brexit Done etc. – the new fascism is calculated to appeal to a broad cross-section of the seemingly disenfranchised and generally apolitical masses, and designed to reinforce a sense of purpose. ‘People Power’, as a related phenomenon is sometimes known, is illusory as it is driven by shadier operators who, when they attempt to transfigure policies, even laws, that don’t square with their agenda, declare that the ‘people have spoken’. It seems likely that the Wisconsin judiciary was rolled over by wider national sentiment. 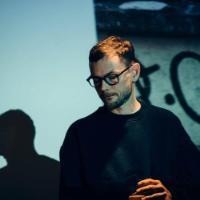 Mikkel Bolt Rasmussen
Rasmussen’s observations are rarely less than acerbic, or brutally to the point. His identification of outrage as a central, often manufactured, incendiary device is key to an understanding of fascist motivation. Trump’s performance at rallies is both the yardstick of his most effective means of communication, and the landscape in which lies most obviously test the credulity of his audience. Pandering shamelessly to the lowest common denominator, and the handiest scapegoat, the former president fires his stadia audiences as efficiently as Hitler or Mussolini. Rasmussen is keen to express the metonymic symbolism of US politics. A professor of political aesthetics, his partisan sorties into the venal buffoonery of Donald J. Trump are frequently satirical, if not forensic, and his rapier is better suited to the work of incision, especially where the abject iniquity of lying and false promises demand redress. But the invention of a brand of inverse Messianism, represented in blow-dried, orange-faced artifice, would not sustain were there not some vestige of authenticity to Trump’s sermonizing:

Behind all the outrage, delusion and over-the-top phoniness there’s an ungainly truth in Trump, namely the admission that things are not nearly as good in the US as the political class and its courtiers continue to claim.

The anti-political ire of his acolytes is brought especially to bear on those ‘Leftists’ who are perceived to be denying the visionary his era in the sun. More serious than Trump’s penchant for hectoring his followers with the threat of fictitious enemies and the propagation of cod-science, is his refusal to condemn the actions of neo-fascist organizations such as the ‘Proud Boys’. The invasion of the Capitol by a substantial band of assorted ‘patriots’ in the wake of Trump’s defeat at the last election took place with his tacit approval, in a clear, and deliberate, threat to the democratic process.

For Rasmussen, dormant fascism is sparked by a network of small grievances accumulating in collective intensity to yield threats to the body politic. The fuelling of ‘violent identitarian emotions…by nationalism, racism and religious fanaticism…is present before it manifests itself as what we normally speak of as fascism’, in a conjunction of electrical charges whose collective significance hugely outweighs the megaphonic hubris of individual endeavour. A nucleus of coordinated grievances, in Rasmussen’s reading, took Britain out of the EU, and elsewhere elected the dictatorial Bolsonaro and Salvini.

Facilitated with monstrous effectiveness by the modern phenomenon of online communication, the new fascism harnesses the power of social media tools as overwhelmingly as the vast propaganda machines of the Third Reich. The added bonus of directness – the masses have access to the daily outpourings of their leaders on Twitter and Facebook – creates the illusion of intimacy. Those who Rasmussen terms the ‘lone wolves’ – Rittenhouse again, Anders Breivik, Tommy Robinson – magnify and distort disparate source materials to feed the fire of their own outrage, and all have succumbed to the enormous potential of ‘Socials’ for dangerously skewing ideology and truth.


Also by Steve Whitaker...
An Unreliable Narrator: The Outsiders By James CorbettPoem Of The Week: 'At The Juliet House, Verona' By Chrissy BanksPoem Of The Week: 'Hunt' By Róisin TierneyA Spell For The Departed: How To Burn A Woman By Claire AskewPoem Of The Week: 'Good Riddance, But Now What?' By Ogden Nash (1902-1971)
The natural prescience of Rasmussen’s position is built on a framework of expert diagnosis; he is a witness at once detached and intellectually engaged, and out of the crucible of polymathic research and close observation, he finds the irony of continually constructed truth playing into the hands of those we should most fear:

Truth is infinitely manipulable. The promise of stability wrapped in a state of permanent instability. Where everything is permitted. Where ‘law and order’ authorize governmental lawlessness.
The emptiness of late capitalist society is hidden in plain sight.