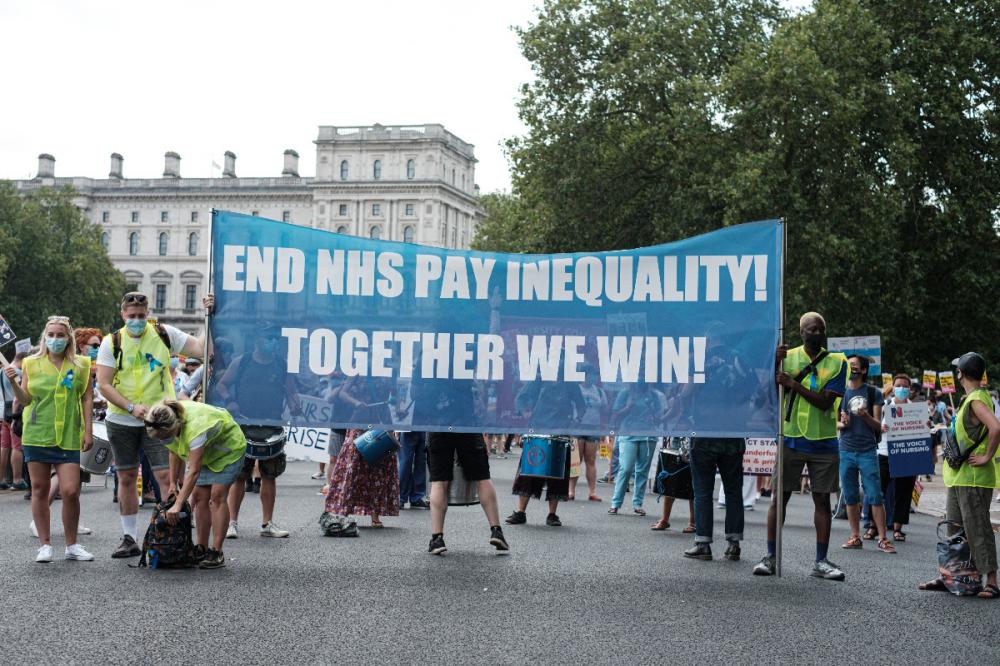 Photo by Ehimetalor Akhere Unuabona on Uns
The TUC has published new analysis which shows how NHS key workers will face a huge real terms pay cut this year should ministers impose a 3% pay settlement.

In 2021, NHS workers got a 3% pay settlement. Ministers have asked the NHS pay review body to recommend a similar award this year. Unions warn this will fall well below the cost of living, with inflation running at 9%.

The new analysis reveals that nurses’ pay will be down as much as £1,600 in real terms this year if ministers impose just a 3% pay settlement.


The picture is bleak for many other NHS staff too – the analysis shows that with a 3% pay settlement:

The analysis has also found that a below-inflation pay rises for NHS staff this year would be “swallowed up” by rising energy costs – with energy prices rising 40 times faster than NHS workers’ wages this year in the event of a 3% settlement.

The cost of living emergency comes after a “brutal” decade of standstill wages, which the TUC says has left workers badly exposed to skyrocketing bills.


Key workers in the NHS are still earning thousands of pounds a year less – in real terms – than in 2010, according to new analysis by the union body:

The TUC says that stagnant wages have played a major role in the “crippling staff shortages” that vital NHS services are facing.

The union body is calling for decent pay rises for all public service workers to at least match the cost of living and begin to restore earnings lost over the last decade.

The TUC warns that any decision to hold down NHS workers’ wages will suck demand out of the economy and stunt economic growth, after new analysis from the union body revealed the “mammoth” hit to England’s economy as a result of standstill wages.

England faces a whopping £2.1 billion loss of economic activity as a result of NHS wages failing to keep pace with inflation, according to the union body.

The North East, Yorkshire and Humber and the North West are the regions which suffer the worst proportionate hits to household spending power.

The union body points to the new research and says healthy pay rises for public sector workers are not only important for NHS workers, but for the wider economy too.

The new analysis comes as thousands of people from across the UK are set to march in London on Saturday 18 June 2022 to take part in the TUC’s demonstration – culminating in a rally in Parliament Square – to demand government action on standstill wages and the soaring cost-of-living.

TUC General Secretary Frances O’Grady said:
“Our brilliant key workers in the NHS helped get Britain through the pandemic. But many are now at breaking point – struggling to afford the basics and put food on the table.

“After a brutal decade of wage cuts and freezes overseen by successive Tory governments, NHS staff have been pushed to the brink by skyrocketing bills.

“Miserly pay offers will only be swallowed up by runaway prices.

“Any offer that falls below the cost of living will be a hammer blow to staff morale – especially as staff shortages continue to cripple vital services – and many NHS workers may choose to vote with their feet.

“It’s time the government started to undo the damage of the past decade. That means giving all our key workers the decent pay rise they are owed.”