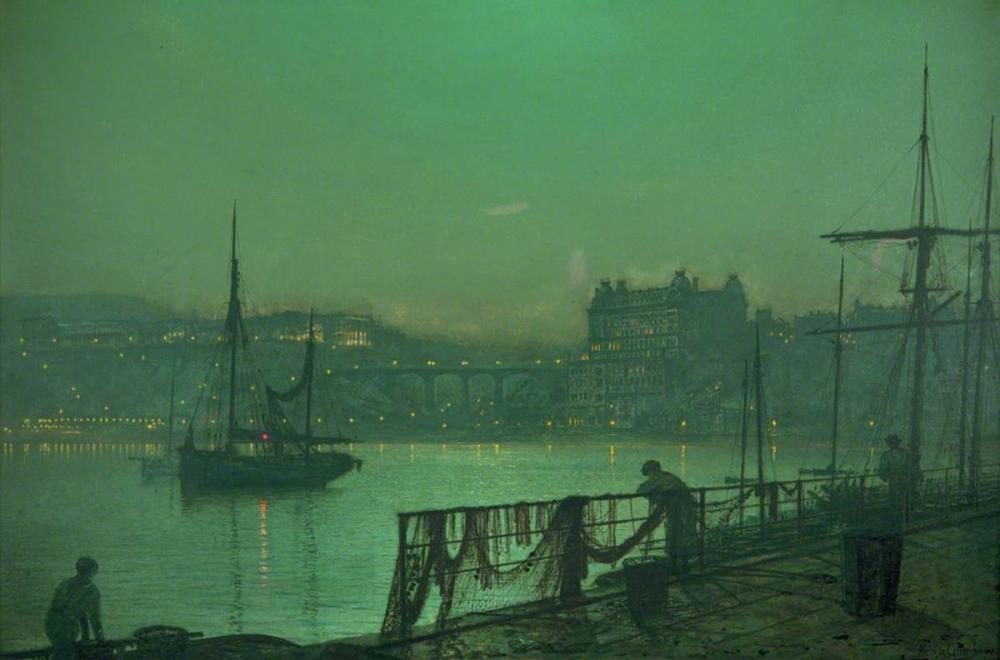 Most inveterate gallery goers develop a technique for dealing with volume. So many galleries have walls crowded with pictures – just too much to take in. My methodology is to stroll through the whole exhibition and select three to five pictures to return to after the initial pass.

Scarborough Art Gallery has saved me the trouble of making a selection by displaying, in one gallery, their five Atkinson Grimshaw paintings, each one carefully restored to their original condition. And what a revelation they are. I was familiar with every one in their original states, but the work of restorers Critchlow and Kukkonen has forced me to rethink my previous opinions.

There seems to be a sudden flowering of interest in the restorer’s art. I have recently seen documentaries on Leonardo Da Vinci and Johannes Vermeer and Scarborough Gallery has a highly informative video and wall display explaining what has been done to our Grimshaws.

One of Grimshaw’s least successful paintings is Sic Transit Gloria Mundi (1876). This painting will be familiar to any walker of the cliffs below the Esplanade from the board above The Spa that reproduces his painting of the famous fire that destroyed the saloon in 1876. Of course, the moonlight is caught superbly, but the fire itself lacks drama. It is a painting of two halves.

The most illuminating of the restorations is to Grimshaw’s 1876 painting New Court, Scalby. I thought I knew it well, but suddenly there are two figures to the right of the picture, concealed in shadow and, presumably, the grime of a century and a half. They are now clearly visible.

The pale figure walking in front of the house is not a girl in white, as I had thought, but a garden gate! The single light in a bedroom window can not be a lone beacon guiding a traveller home as I had surmised. Cleaning has revealed there are many other light sources emanating from the house.

For me, this brings into question my belief that interpretation is down to the observer and is valid against most other opinions. How can this be true when an interpretation is based on such a fundamental misunderstanding of what the artist intended in the first place? Yes, I have to rethink what Grimshaw painted and what I had taken to be his objectives at the time the brush met the canvas.

In Lights in the Harbour (1879), a woman shades her eyes (why? It is another night scene) and looks towards the Grand Hotel and the town itself. We can see more detail of the ships in the harbour and features of the fishing nets. It is typical Grimshaw, with soft moonlight revealing details of the lives of the people dependent on the sea. However, we now see them as Grimshaw intended.

Not only am I grateful to Scarborough Art gallery for having the confidence to limit a whole gallery to just five pictures, but also for giving such an insight into the restorer’s craft. I feel my understanding of Atkinson Grimshaw has been enhanced.
Also by Mike Tilling...