If Paradise... Andy Fairweather Low & The Low Riders At Settle 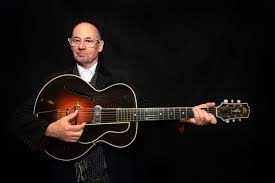 Andy Fairweather Low
Andy Fairweather Low’s genial onstage persona does not dovetail neatly with expectation: his easy wit and endearing self-deprecation are entirely at odds with an illustrious career whose stepping stones en route have included Amen Corner and several successful solo ventures. Low’s connections are the stuff of legend: he has accompanied Eric Clapton, George Harrison, Roger Waters, Linda Ronstadt and Emmylou Harris, and many others in various historical incarnations.

And the irony was not lost on him; seemingly at home in the humble surroundings of the world’s oldest music hall – Settle’s Victoria Hall – Friday evening’s enthusiastic audience visibly warmed to Fairweather-Low’s anecdotes of playing Madison Square Gardens, and of conversations (sharp, collective intake of breath here) with John Lee Hooker. 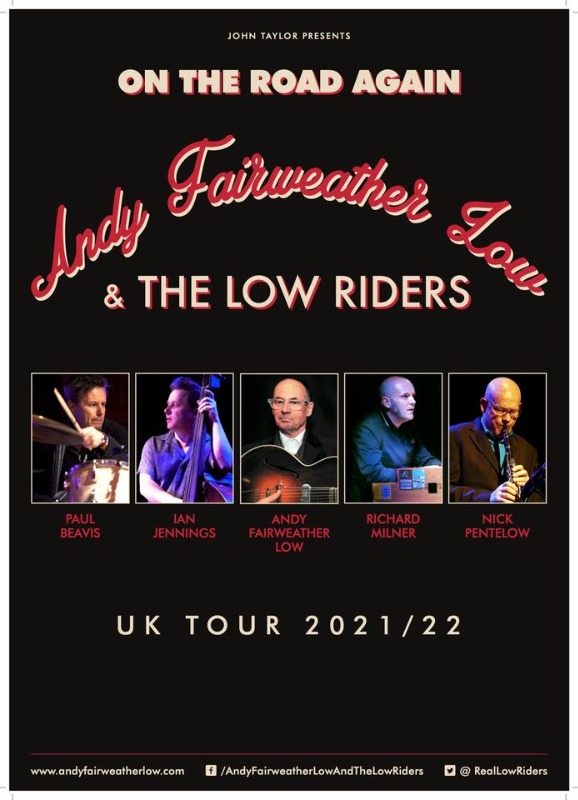 That many musicians of Fairweather Low’s vintage – he is seventy three – are steeped in Blues traditions mitigates the surprise and Friday’s setlist overwhelmingly reflected the significance of R and B to the band’s mandate. And what a performance it was…in spite of the band shortfall: the Low Riders were without their regular Bass player Dave Bronze, who’d unfortunately been laid low with Covid. Not that the omission detracted from the received impression; this ensemble is sufficiently practiced to hold a gig together, even without a bass backbone.

An eclectic mixture of homegrown and ‘borrowed’ numbers, the concert opened with a tight, if counter-intuitive ‘Reggae Tune’ before the Riders let rip with a bouncing version of the classic ‘Route 66’. It is a testament to Fairweather Low’s musical range that he can put a new spin on an otherwise timeless tune with a guitar flourish, as he did with an early Lennon number and later with the Beatles’ ‘From me to you’. The former Amen Corner lynchpin is nothing if not versatile; a rack of perhaps five guitars graced one corner of the stage, and each was utilized to powerful effect, whether to bolster rhythm or facilitate a Bluesy lead break. The dapper and energetic guitarist wears an improvisational urge lightly, as he did for several of his own pieces, not least with wah-wah pedal zeal on ‘La Booga Rooga’, or in the raunchy ‘Gin House Blues’.

The anthemic Seventies hit ‘Spider Jiving’ was well served with some impeccably-timed acoustic work, during which you were left marvelling at the band’s skilled collective endeavour. As close-knit as you might expect from musicians who have performed together for decades, the band’s overall drive never compromises individual innovation: another ace in the pack – Acker Bilk’s ‘Strangers on the Shore’ – showcased the talents of renowned saxophonist and clarinetist Nick Pentelow whilst ‘Dream a Little Dream’ gave vent to the subtle keyboard work of Richard Milner.


Also by Steve Whitaker...
An Unreliable Narrator: The Outsiders By James CorbettPoem Of The Week: 'At The Juliet House, Verona' By Chrissy BanksPoem Of The Week: 'Hunt' By Róisin TierneyA Spell For The Departed: How To Burn A Woman By Claire AskewPoem Of The Week: 'Good Riddance, But Now What?' By Ogden Nash (1902-1971)
A night with the Low Riders could never conclude without renditions of the evergreen ‘Wide-Eyed and Legless’ and the Amen Corner number one ‘If Paradise is Half as Nice’, and both repaid the audience’s clear adoration in spades.

‘It might not be Shakespeare’, said Fairweather Low, towards the end of a tremendous evening, ‘but it’s bloody good’, and few would have argued.


Andy Fairweather Low and the Low Riders played at Settle Victoria Hall on 5th November, and are touring.