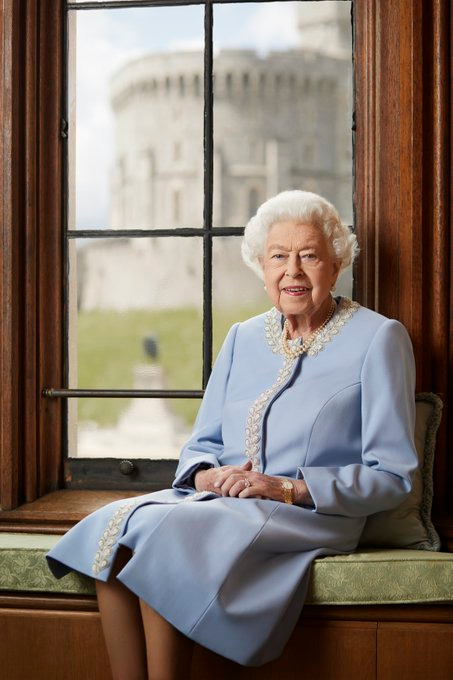 credit - Jacob King/PA Wire/PA Images.
I am a monarchist through and through. I know people who are not, who do not have even a soupçon of interest in the royal family, but with the Platinum Jubilee, we recognise and celebrate seventy glorious years of service - good going in anyone’s book, so let’s wave the flag and shout congratulations to the most enduring of our public figures, who stands for duty, service and love of a nation.

My grandma looked like her mother. Didn’t everyone’s? No, really mine does, or rather did. I have the photo to prove it. My mother, who has reached a hundred and still soldiers on, does not, however, look anything like the Queen, and while they have led very different lives, they have many shared experiences, not least World War Two when my mum served in uniform for five years and Princess Elizabeth, also in uniform, drove an ambulance. Both celebrated the peace among the crowds in the streets. Perhaps it’s a generational thing but they also seem to share the same quality of indomitability and determination to go on!


Diamond Jubilee Pageant - credit Tony Harrison
Of course, the most recent celebration was the Diamond Jubilee in 2012 – was that really ten years ago? Is it age or Covid which seems to have compressed time? But I also remember the Silver Jubilee in 1977. I was travelling back to university on the National Express coach, having been home for the weekend, and we passed street party after street party. The weather was kind, the bunting was fluttering and the cakes filled the trestle tables as Her people enjoyed the opportunity to celebrate. Now, we are forty five years on – who would have believed it? 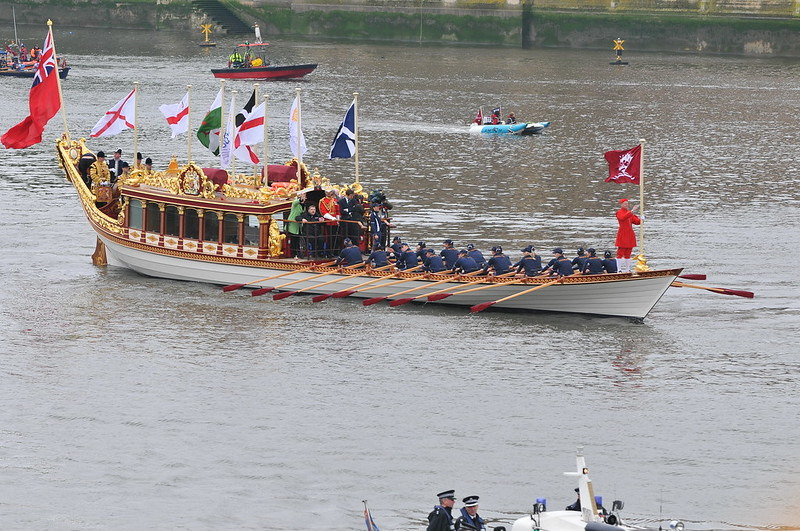 credit Tony Harrison
Truly a working royal, she has dutifully represented us on so many occasions, no matter how she felt about the event or the people with whom she was obliged to mix. It has been her job and the cars and carriages, the pomp and ceremony, the palaces and castles, clothes, crowns and jewels (what about those brooches and their subtle messages!) have simply been workplace accoutrements. A little different from a pair of overalls perhaps, but no doubt, at times, just as uncomfortable.

Her working diary has been filled with lunches, dinners, galas, grand tours and garden parties, and no, I’ve never been invited, but I do know someone who has. I joked with a friend once about him having meetings and ‘doing deals’ on the golf course and told him how easy his life was. He looked at me askance and said there is nothing easy or relaxing about a business game of golf. 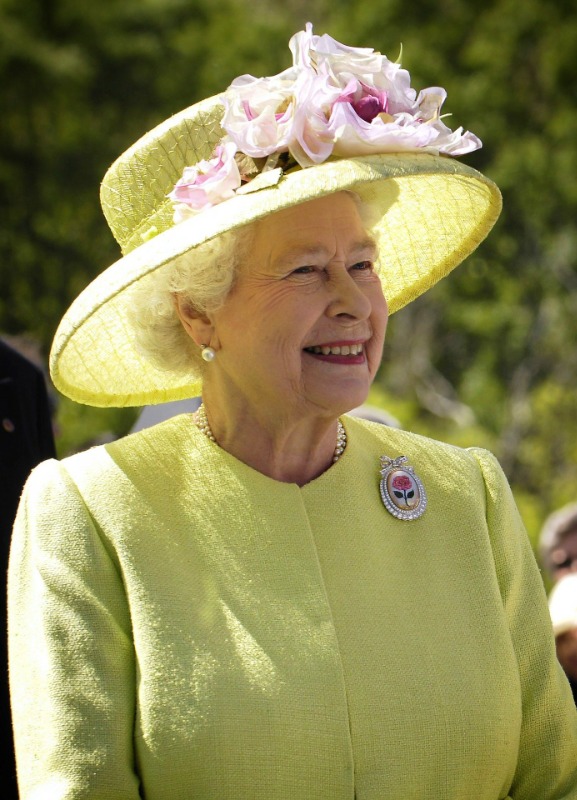 Image by WikiImages from Pixabay
Saying the right thing, doing the right thing (sometimes that meant losing deliberately), spending time with people you didn’t particularly like let alone respect, all in the name of business. Well, how many ‘games of golf’ has the Queen played on our behalf, as she has done her duty with grace and elegance, confidence and aplomb because she has had to, not necessarily because she wanted to? The Crown was thrust upon her. She was not born to be Queen but the abdication of her uncle changed her life and she rose majestically to the challenge. Suddenly, she had to prepare for a life of service and when, at the tender age of twenty one, she vowed to serve the Commonwealth for the rest of her life, she meant it – and has stuck to it.

What else do I think of when I think of the Queen? Well, what is in that handbag? You should never look in a lady’s handbag so we will never know for certain, but we have learned it is used to signal her wishes to her attendants. Rather than mutter, “Come on dear, I think it’s time for us to leave”, she simply moves her bag, courtiers act and off she goes. For a long time, no one knew her secret, no one was offended, and all went smoothly.

The carefully cultivated wave, regal and grand in its simplicity, says it all. She has balanced the crown, both literally and metaphorically, in giving her time to serve her nation. 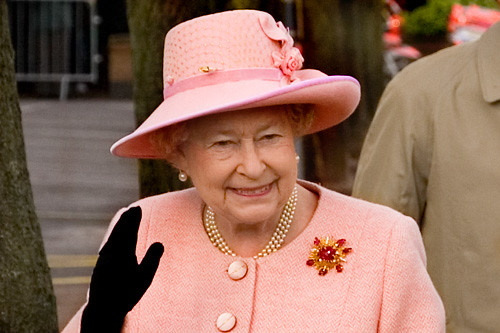 credit mrschnips
Her love of dogs, particularly her corgis, the breed with which she will always be associated, is well known. Her fondness for her horses and horse racing is well documented and there are many photographs of her with the animals she loves, in her most comfortable of surroundings, with a brilliant smile on her face. They document the more human side of a woman who famously keeps her opinions to herself. ‘Never complain, never explain’ is her maxim and it has served her well, no matter how many times in the many decades of her reign she might have wished to break the rule she set herself.

How many Prime Ministers has she known? Yet she has always risen above politics. Privately, how many has she scolded and ticked off - or what did she wish she could say? Oh, to have been a fly on the wall! She is human and like the rest of us, has an opinion, yet I bet she has had to bite her tongue more often than is healthy.

For me, it was the Bond sketch, featured in the opening of the 2012 Olympics, which showed what a good sport she is (pun intended), and revealed her sense of humour. She certainly did not give the impression there was any coercion needed to get her to take part. It was subtle, refined, tasteful, classy – like the Queen.

I could go on but somehow, more importantly, and like the countless hats versus the headscarf (I had to get them in), that scene for me hinted that beyond the public figure, there is a woman with feelings who likes a bit of fun.

We have very rarely heard the Queen discuss her private life. Her fierce protection of her privacy has made her something of an enigma. It was shocking, therefore, to hear her refer to her ‘Annus Horribilis’, in a speech at the Guildhall in London, 1992. We all have them. They say these things are character building. I’ve certainly been through times when I have sincerely said, “Please, my character doesn’t need any more building”, and I won’t be alone. What must she have thought, how must she have felt to make a reference to her troubled family in public like that – and her year wasn’t even over! It reminded us that she is human.

She has an enduring presence. She is the only queen I have ever known - although I have only ever seen her once, when I was a child and she passed by in a swiftly moving ‘posh’ car. She has always been there, a distant yet familiar figure who has, little by little, allowed us to see more of the person behind the Crown. The documentary of 1969 gave us a first insight into family life and while some felt it destroyed the mystique surrounding the monarch, viewing figures suggest we couldn’t resist a peep behind the curtain.

The Queen, the history, the tradition, the ceremony are all proven tourist attractions and opening the doors to her home proved to be no different. The queues to get into Buckingham Palace, when it was opened to the public, were evidence of our appetite for more. Within one week of going on sale, they had sold three years' worth of tickets. That’s called smashing the target!

She is known for her ability to mimic people and of course, she has herself been portrayed on both the large and the small screen. Most memorably, perhaps, by Helen Mirren in The Queen which offered a dramatised interpretation of the Queen’s response to the death of Diana, Princess of Wales. Seen trying to do Her best by her grandsons and by Her people, she was in a lose, lose situation, unable to please everyone.

More recently, in The Crown, the young Queen Elizabeth has been portrayed delightfully by Claire Foy, followed somewhat more somberly by a more mature Olivia Colman and soon to come, Imelda Staunton. It’s fiction mixed with a little fact, but have they got it right? I don’t know, but the actresses have shown respect, and audience figures suggest they have done their job well – maybe helped by the nation’s prurient desire to watch anything purporting to do with the Queen.

As I have said, she’s the only queen I’ve known. I wasn’t born when she came to the throne and she is still working whilst I have retired. If anyone deserves the bouquet and the carriage clock, it is her. 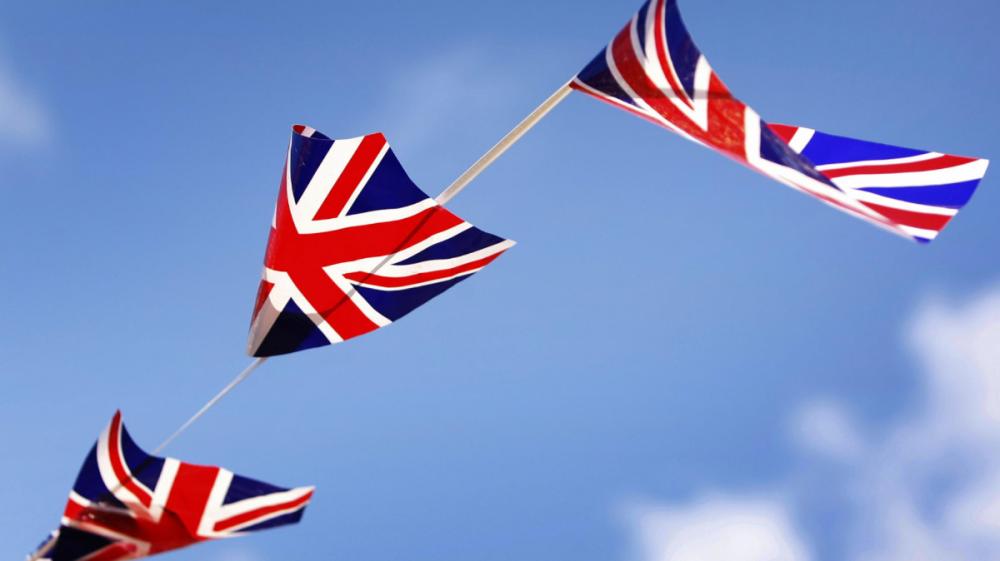 Also by Artis-Ann ...
The Best And The Absolute Worst: The Dressmaker’s Secret By Lorna CookCrimson Soil: Only Killers And Thieves By Paul HowarthOrdinary Evil: A Spoonful Of Murder By J. M. HallSenoy, Sansenoy And Semangelof: When I Close My Eyes By Jemma WaynePerhaps, Perhaps, Perhaps: The Christie Affair By Nina De Gramont
More in this series...
Music At The JubileePlatinum Jubilee Coronation ChickenRoyal Family's Favourite Games To Play During The Jubilee CelebrationsThe Queen And Her CarsThe Queen's Dogs Over The YearsQueen’s Property Portfolio Worth £3.7bnPlatinum Jubilee: Celebrate With The Queen’s Favourite Fragrance3 Patriotic Cocktails To Celebrate The Platinum JubileePlatinum Jubilee Celebrations Around The WorldThe Jubilee WeekendRoyals On Rails At The National Railway MuseumVisit The World's Smallest Jubilee PartyQueen's Jubilee: How To Celebrate 70 Years SustainablyCan You Spot The Crown In This Jubilee-Themed Brainteaser?6p Pints Up For Grabs At Greene King Local Pubs8 Cake Portraits Of The Queen To Celebrate The Platinum JubileeIt's Jubilee Weekend Next Week Let's Raise A Glass Of FizzThe Union Jack Jubilee Brainteaser That 65% Of People Are Giving Up OnInsuring Your Jubilee Street PartyPlatinum Jubilee: Stay Alert For Street Party Road Closures