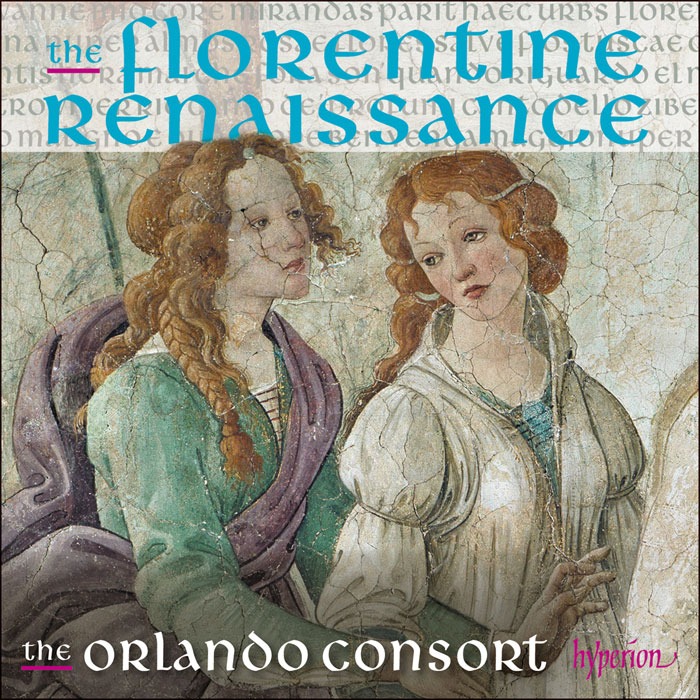 For those who love Italian Renaissance sacred acapella music, look no further than this attractive disc. The talented quartet of male singers that comprise the Orlando Consort have chosen to celebrate the musical and literary worlds of Florence’s golden age under the Medici.

Duffay and Binchois represent the 1430s to 1450s and Lorenzo de’ Medici, Isaac & Savonarola the 1460s to 1490s. The research that has gone into producing a CD of this quality is to be commended: for the laudas, Carnival songs and Isaac’s secular songs it was undertaken in Florentine libraries during a residence at I Tatti, The Harvard University Center for Italian Renaissance Studies, with fellowship support from the Leopold Schepp Foundation.

The disc includes a few unearthed gems with first recordings of Isaac’s Corri, Fortuna newly supplied with a text by Serafina Aquilano and Lasso quel ch’altri fugge with its missing bass part reconstructed. Isaac is also proposed as the composer of two Carnival Songs Canto De' Profumi and Canto Dello Zibetto on texts by Lorenzo, with a reconstruction of the missing superius part of the Canto dello zibetto.

According to Patrick Macey, who wrote the superb programme notes, sacred music and secular songs were performed in a variety of Florentine contexts, from the festive dedication of the cathedral in 1436, to songs from the 1470s to the 1490s that trace the cycle of festive observances in Florence. These include Carnival in January and February, followed by sacred laudas for Lent, spring songs for May, and music for the midsummer feast of St John the Baptist on 24 June.

The opening track is Dufay’s large-scale motet for the dedication of the cathedral, Nuper rosarum flores, draws attention to the golden rose, bestowed on the city by the Pope as a sign of favour, and prominently displayed on the cathedral altar.

It sets the scene well for what is to follow: impressive precision singing with a first class technique. I thought the parish church of St John the Baptist, Loughton, Essex, acoustic dry. Matthew Venner’s countertenor adds to the authentic sound and the controlled balanced singing and interaction between the voices is admirable, particularly the tone and the interpretation of the musical structure of each piece.