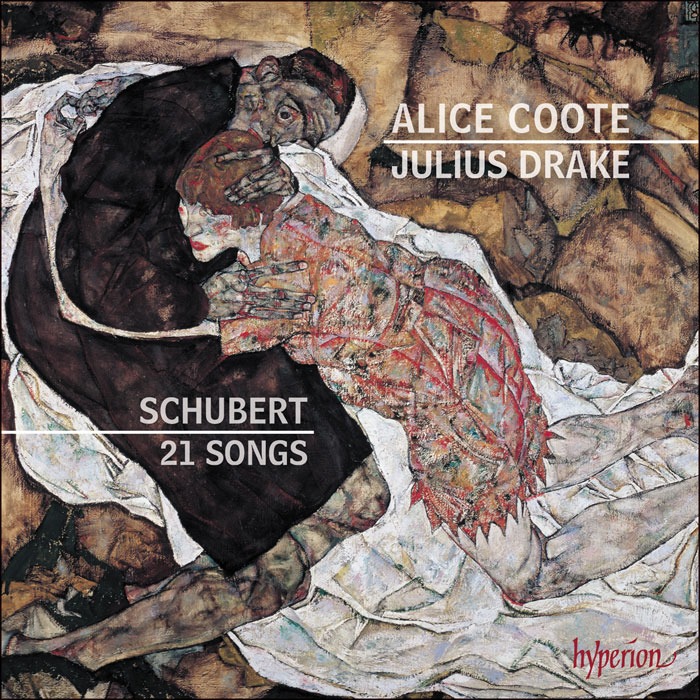 This recital perfectly demonstrates the powerful partnership between a composer and a writer. It is the poetry of Goethe that had a big influence on the young Schubert. Wigmore states: the teenage Schubert’s relationship with the poet flared up in October 1814 with Gretchen am Spinnrade, and he was excited about this poetry for its immediacy and spontaneity of feeling, its eagerness to seize and glorify the moment. Schubert had produced nearly fifty Goethe settings, many among the world's best songs by the summer of 1817.

Other writers include: Schulze, Matthäus von Collin, Uhland, Lappe, Claudius, and for each Schubert takes their poetry and crafts his magic. The Shakespeare / Von Bauernfeld ever popular An Silvia is performed so the verve and grace are captured.

Coote opens her recital with a favourite Goethean image of the moon as a source of peace and healing: An den Mond. It is delectably performed and over all too soon; the beautiful accompaniment leading to Coote'slovely entry sets up a disc that delights from beginning to end.

The Coote and Drake musicianship adds that special gravitas to an album where vocal colour and nuance shine through with variety of expression eloquently captured with skilfully crafted phrasing to createintimacy.

Schubert devotees will not be disappointed with this appealing 71 minutes of utter bliss.
Also by Andrew Palmer...
Classical Music Album: John Ireland Orchestral Works - Sinfonia Of LondonWeekend Dining: The Crown Inn At Roecliffe, BoroughbridgeFantastic Frankie A Tale For Our TimesClassical Music Album: Weinberg String Quartets Vol 2Getting To Grips With The Abstract Karen Southworth